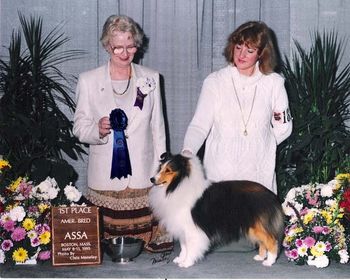 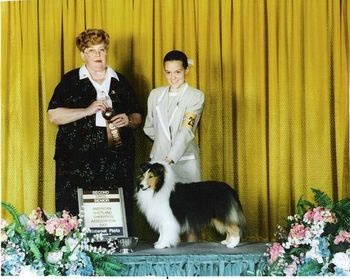 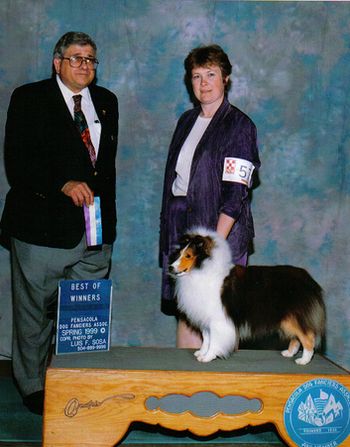 Ch. Lorain's Reasonable Doubt, CD, PT, VC "Bruce" was my first homebred champion, from my first litter. From the beginning he was my pick, although others advised keeping his sister Becky.  Not wanting to raise littermates together, Bruce was sent to live with an aspiring junior handler, Lauren White.  He came home at eighteen months, when Lauren's love for Weimeraners proved stronger than the sheltie. Slow to mature, Bruce's first big win was the Amercan Bred class at the Massachusetts American Shetland Sheepdog Specialty in 1995, at age 3. He followed that with his first 4 points the following year. A small, moderate good moving dog,  he sat on those four points for the next four years, losing to dogs with bigger, plushier coats.  At age seven, with a string of judges in his favor, he finished in two and half months of showing with four majors

Bruce was very much like his mother Brandy, in a sounder package.  He too, would do anything you asked him to. The ever wagging tail was the icing on the cake.  Sadly, he died of a ruptured bile duct at age 8 1/2, just as he was working on his agility title to give him the ASSA VCX award. His sunny disposition is still sorely missed, but lives on in his grandchildren Bailey and Peaches.